Waikiki on the island of Oahu is the home of what are sometimes referred to as the Wizard Stones.  As all international flights to the Hawaiian islands come into Honolulu airport, I invariably spend some time at the beginning and end of any trip to Hawaii in Waikiki and the Wizard Stones form a familiar landmark in that respect.

What Are The Wizard Stones?

“Before the reign of O‘ahu’s chief Kakuhihewa, four individuals came from Tahiti to the shores of Waikiki bringing with them tremendous healing powers. Kapaemahu was the leader of the four and honored for his ability to cast aside carnality and care for both men and women. Kapuni was said to envelop his patients with his mana. While Kinohi was the clairvoyant diagnostician, Kahaloa— whose name means “long breath”—was said to be able to breathe life into her patients. The art of healing they practiced is known in the Islands as la‘au lapa‘au. In this practice, plants and animals from the land and sea, which are known to have healing properties, are combined with great wisdom to treat the ailing.

The four healers settled in the area within Waikiki known as Ulukou but soon became renowned throughout all of O‘ahu. When the time drew near for them to return to Tahiti, they wanted their presence and power to remain in a tangible form. They would each place their healing powers, their mana, within four separate stones that could then be used by the Hawaiian people in their absence.

They called for the stones to be brought from a Kaimuki quarry, nearly two miles away. The particular basaltic rock they chose, often referred to as “bell stone,” was selected because of the tonal quality it possessed when struck. It is said that thousands came on Po Kane (the Night of Kane) to move the stones, each one weighing several tons. Originally, two were placed where the healers dwelled and two where they bathed. Ceremonies lasted for one cycle of the moon; then, the four healers were gone”.

The stones have moved in their time and in 1997, to mark the recogniton of their historical signifiance, a permanent homes for the stones was created.   Waikiki magazine reports:

“It was at this time that the name was changed from “Wizard Stones of Kapaemahu” to “Na Pohaku Ola Kapaemahu a Kapuni,” undoing the westernized understanding of healing powers as some sort of magic. Following the direction of Papa Auwae, four plants with medicinal value were added to the site—ma‘o (Hawaiian cotton), ‘ohe (bamboo), makahala (wild tobacco) and naupaka kahakai (beach naupaka). The group Na Haumana La‘au Lapa‘au O Papa Auwae is the adoptive caretaker of Na Pohaku”.

The stones provide a beautiful example of the legend and culture of the islands.

Of course, images take us beyond the day to day language of words. Certain images can inspire us and move us at a deep level. This image of the Halema’uma’u Caldera provides an opportunity to practice ‘nalu’ a useful contemplation technique. In its simplest form this involves taking some time to look at the image, tuning in and noticing what you notice. Stop when you feel satisfied that it is the right time to stop. If you want to share your experiences I would love to hear from you.

I am looking for inspirational images for the Huna Adventurer’s newsletter so if you would like to contribute please contact me at: urbanhuna@gmail.com If requested contributors will be credited.

This actual picture was taken by a friend Catherine Vail on her most recent trip to Oahu.  Thank you for sharing Catherine 🙂 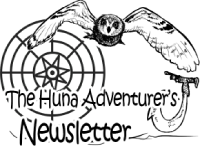